NDA - THE FLOODGATE OF OPPURTUNITIES

Serving in the Armed Forces of the nation not only commands pride and respect but also a plethora of allowances and amenities. This comes both in terms of job challenges and monetary terminologies. Thus, the NDA opens up the floodgate of opportunities for cadets to serve the country.

Maintaining our top position in clearing the esteemed exam, we at our coaching institute have intricately designed a curriculum that is scientific and 360 degree in approach. 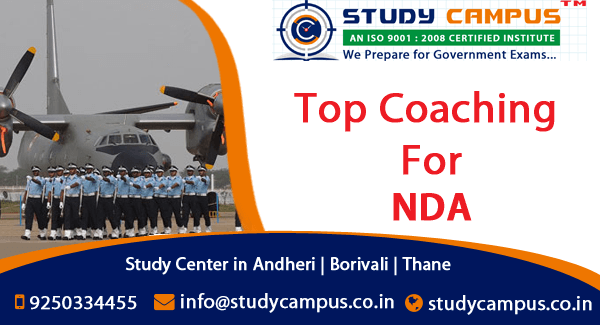 NDA is one of the most venerated academy that is the key to any student who dream his career in the Indian Armed Forces. Here, cadets are trained together and made ready for their pre-commissioning training in their respective service domains; Army, Navy, and the Air Force.

However, the entry to this prestigious academy comes with the cracking of an entrance exam, held every year twice by the UPSC.

WHY WE STAND AS YOUR BEST CHOICE:

We operate in the location of Borivalli, Mumbai. However, students from north-west Mumbai, Charkop Gaon, Dongri etc are also enrolled with us. Get the best NDA Coaching in Borivalli and make your dream turn to reality.

I. Written Examination: The exam will constitute 2 subjects, Maths and General Ability Test and each subject is given the time limit 2 ? Hours, maximum marks for Maths is 300 & General ability is 600.

II. Interview: Qualified candidates in the written examination will be called for Interview conducted by SSB (Services selection board).

Always try to join a good NDA Coaching that helps you to score better, a good coaching can easily provide you subject wise dedicated teachers, NDA mock test, topic wise test, online and offline both mode of NDA classes, affordable and flexible payment option and many more, and you can avail all these facilities at Study Campus very easily. Our Advantage for NDA Exam Preparation:

Here are few students who have undertaken our coaching programs for various competitive and entrance exams and shown excellent and outstanding performance in their field of interest.